Do you have more photos from your youth or from your parents? If the campsite is recognizable on these, we would be very happy to receive more pictures. Further information about the history is also very interesting for us.

Were you with us back then? Tell us about it!

Here you can find out what has changed or just come and book your place. We would be very happy about that. 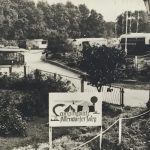 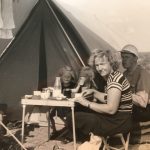 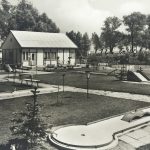 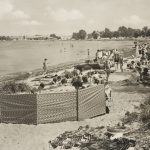 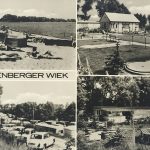 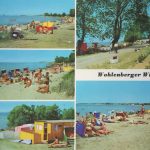 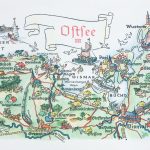 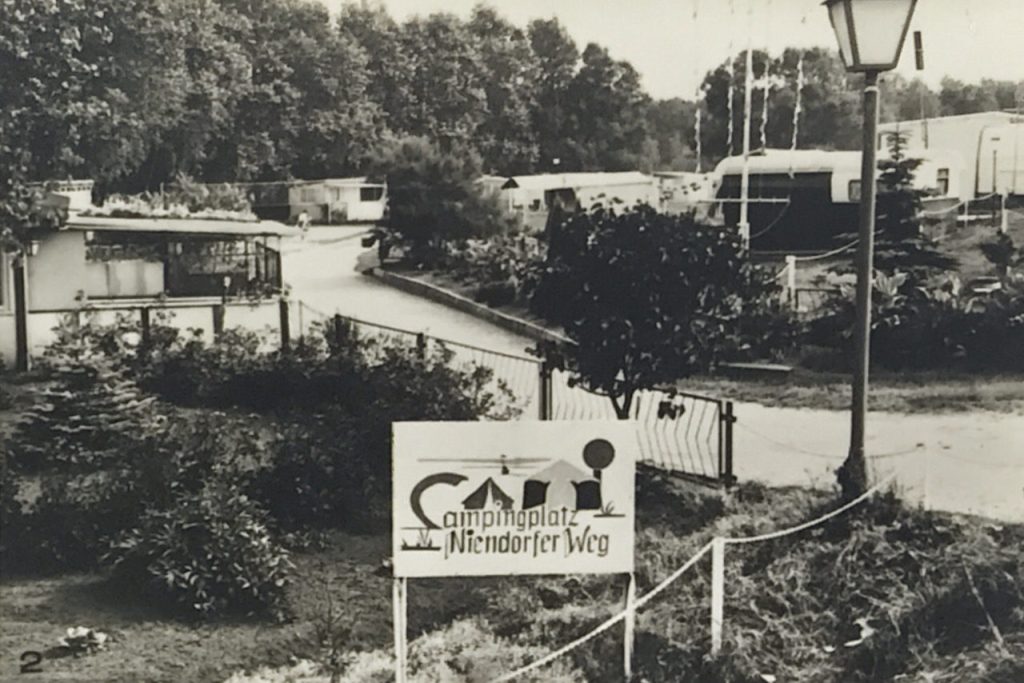 The area at the Wohlenberger Wiek was already inhabited by people in prehistoric times, as evidenced by the Bronze Age burial mounds near Wohlenhagen. The presumably Slavic rampart in neighbouring Wohlenberg shows that this area was also inhabited during the Slavic settlement period.

Like most of the villages in north-western Mecklenburg, the villages (…) came into being in the course of the German colonisation of the East at the beginning of the 13th century. Groß Walmstorf is mentioned as Walmanstorp in the Ratzeburg tithe register of 1230. Likewise Niendorf, which was called Nova Villa around 1230 and Nyndorpe around 1299. (…)

The peasants recruited to settle Mecklenburg in western Germany were personally free. However, their originally good legal position changed in the following centuries as the knighthood gained more power and influence. From the 16th century onwards, the knights expanded their initially modest landholdings and switched to estate farming. After the introduction of serfdom in the 17th century, the peasants were personally and economically unfree and could be driven off their farms. After the Thirty Years’ War, in the largely depopulated countryside, the deserted peasants’ places were first assigned to the estates. Then entire peasant villages were laid out and incorporated into the estate.

Since the Middle Ages, Wismar’s fishing rights extended into the Boltenhagen and Wohlenberg Wiek as well as into the Golwitz, the Breitling and biS Wustrow, while the inhabitants of the Stranddöder were only allowed to fish from the beach or with stand nets. There had always been disputes about this.

Since the middle of the last century, fishing developed into an independent occupation on Poel, which was practised all year round, especially by younger farmers’ sons. The same happened in other beach villages. Finally, in 1897, the bay was divided into fishing grounds, the fishing of which alternated between the fishermen of Wismar, Poel and the other beach villages up to Alt Gaarz. The two small islands that still existed in the bay in the Middle Ages, the Lieps and the Holm = Whale, could no longer be used as pasture for the council’s horses.

The storm surge of 12/13 November 1872
is demonstrably the most severe storm surge in the western Baltic Sea. Maximum peak water levels of around 3 metres above mean water were recorded.
The effects on the lives of the people and their surroundings were devastating.
The cause of the catastrophe was a back-swing of the piled-up Baltic Sea water, a turn of the storm to the north-east and an increase of the wind to hurricane force.

Our campsite was probably mostly under water at that time. Only the roof of the north sanitary block would still have been visible.

More in the BSH flyer

Among the villages of the present-day municipality of Groß Walmstorf, several farms remained in Wahrstorf and in Wohlenhagen in addition to the estates. Groß Walmstorf with the outlying estate Niendorf developed into a pure estate and came into the possession of the Lüneburg knighthood. Until the end of the 19th century there was still the Kl. Walinstorf estate. Its fields were then annexed to Gr. Walmstorf.

There were plans to build a war harbour for a fleet of the German Confederation at the southern end of the Wohlenberger Wiek (HARKORT, 1864). However, this was never realised.

Apart from the dissolution of the Klein Walmstorf estate, the settlement structure changed little until after the Second World War. In the period before the turn of the century, the area was made accessible by rural roads (Grevesmühlen-Hohenkirchen 1890 Wismar-Klütz 1897) and around 1920 it was connected to the electricity grid.

A significant break in the development of the villages was the expropriation of land holdings over 100 ha under occupation law after the Second World War. The Groß Walmstorf estate was first declared a state estate and then a nationally owned estate around 1950. In the other three villages, the estates were resettled in the course of the land reform and a large number of small farms were created.

The population in the four villages of today’s municipality had risen from 397 inhabitants around 1935 to 1063 inhabitants in 1946 due to the influx of refugees and expellees from the east.
In Groß Walmstorf, the building structure of the village was largely preserved, as the estate was not developed here. A row of semi-detached houses was built along the village road and later a three-storey block of flats on the northern edge of the village. The farm buildings of the estate were extended by stables and workshops. In the other three villages, the townscape changed considerably after the division through the construction of small new farmsteads and the demolition of farm buildings of the former estates.

In the course of the collectivisation of agriculture and the creation of new large-scale farms, several LPGs were initially established, which were merged into one farm after 1960 and later affiliated to the LPG Warnow and VEG Gr. Walmstorf.

The small village of Niendorf belonged to the municipality of Groß Walmstorf in the Grevesmühlen district of Rostock.

Camping, later called camping, became more and more popular, especially among holidaymakers who could not get places in homes or other accommodation, or who preferred this kind of holiday. They had to abide by strict rules, however, and were only allowed to pitch their tents or caravans on the state-established campsites, because the shore of the bay belonged to the border area and was strictly guarded. Troops of the Border Brigade Coast were stationed in Boltenhagen Tarnewitz and on Poel, as well as in the Rerik area. Such campsites (with capacities of over 1,500 people in some cases) were built in Niendorf, at Wohlenberger Wieck, near Zierow, near Timmendorf, on the Boiensdorfer Werder, near Pepelow, near Tesmannsdorf and near Rerik. Often, so-called permanent campers set up camp on them. This trend has declined sharply in recent years.

Since the end of the 1960s, tourism has become increasingly important in the community. In 1968, the “Niendorfer Weg campsite” was built on the unique Wohlenberger Wiek. Only here is the water always 2° warmer than at other sandy beaches of the Baltic Sea due to the shallow depth. The site had a capacity of 1500 people until 1985 and of about 500 people from 1986 onwards. Several company-owned recreational facilities were built in Wohlenhagen and in Niendorf.

With the increasing motorisation, the Wohlenberger Wiek developed into an important local recreation area for tourists from a wide radius. In this context, the new beach road between Wahrstorf and Niendorf was built in 1972.

The Border Brigade Coast was not allowed to leave anything to chance. Over the years, an almost perfect control system was set up. Large watchtowers, observation posts on the beach and a mobile searchlight crew. In the evening, the water was illuminated. The searchlights had a range of up to three kilometres. The sea did not know darkness for decades. In summer, the observation posts on the watchtowers were very popular. Bikini peeping at work. Nevertheless, a free-body culture also developed. There are worse jobs. But in winter, the patrols were pretty tough. An icy wind blew from the Baltic Sea. The eight-hour patrols became torture.

Until 1990, the FDGB holiday facilities in Niendorf and Wohlenhagen had up to 200 beds. There were another 150 places for children in two holiday camps. In addition, there were about 62 privately rented beds in the municipality. These capacities were fully occupied during the season when the GDR was closed to tourists. However, they could not meet future requirements, mainly in terms of quality. The conversion is still not completed today.

After reunification, the campsite was renamed “Campingplatz Niendorf” at Strandstraße 21 on 6 May 1993 and continued to be run by the Ehrlich family. The municipality of Hohenkirchen was formed in 2005 from the previously independent municipalities of Groß Walmstorf and Gramkow. It is administered by the Amt Klützer Winkel with its seat in the town of Klütz. Here is a list of local monuments.

With its shallow beach and sandbanks that dry out at low tide, the Wohlenberger Wiek is particularly suitable for families with children and water walkers. The 1m depth line is about 100-200m from the shore, so the shallow water warms up very quickly when the sun is shining. Due to its location, the bay is well protected from frequent south-westerly and westerly winds. The shallow water offers many waterfowl a wide range of night feeding opportunities. By relocating the L01 from the immediate beach area to the hinterland, the attractiveness of the Wohlenberger Wiek could be significantly improved and the hinterland could be further developed for tourism to create jobs.

There are many parking spaces for day visitors, which are operated by the municipality for a fee.

Since 1 January 2020, the campsite has been managed by Alexander Ehrlich under the new name ostseequelle.camp. He is actively supported by his team and the whole family.

In the municipality, three tumuli in Wohlenhagen and a medieval fortified farmstead in the Schmiedewald near Groß Walmstorf are protected as prehistoric and early historic archaeological monuments. (…) Four massive estate workers’ cottages of the former knightly estate of Groß Walmstorf are listed buildings.

Other buildings which are characteristic of the locality and which were not previously classified as monuments should definitely be preserved in their external appearance. Examples include the manor house in Groß Walmstorf and the adjoining small park with valuable trees, as well as the remains of the estate in Wohlenhagen with the residential house, the two-storey granary and the large barn.

More about the municipality of Hohenkirchen today: